Chicago Shakespeare Theater (CST) believes that Shakespeare speaks to everyone. A global theatrical force, CST is known for vibrant productions that reflect Shakespeare?s genius for storytelling, language and empathy for the human condition.

The Chicago Shakespeare Theater spaces include:
? Jentes Family Courtyard Theater – A 500-seat courtyard-style theater inspired by theaters in early modern England that evokes the design of Shakespeare?s Globe and the Royal Shakespeare Company?s Swan Theatre. The three seating levels?Main Floor, Dress Circle and Gallery?wrap around the thrust stage, fostering an intimate, immediate relationship between actors and audience.
? Carl and Marilynn Thoma Theater Upstairs – The theater Upstairs is a 200-seat venue in which both the stage and seating configuration can be arranged in a variety of ways?suiting the creative choices of the artistic team with practically limitless versatility.
? The Yard – In the 2017/18 Season, Chicago Shakespeare will open its third stage: The Yard?introducing a new trend in theater architecture to Chicago. The design features a series of mobile ?towers” that allow for the playing space to be configured in a variety of shapes and sizes, with audience capacities ranging from 150?850.

What you can expect from Chicago Shakespeare Theater:
? Bold Theatricality – Rooted in the legacy of Shakespeare as an unparalleled theatrical innovator, CST?s unforgettable productions are at the heart of their mission. The epic plays and musicals in the Subscription Series, world premieres of new works, along with their magical performances for families, each theater season engages one of the broadest audiences of any theater in America today.
? Creative Learning – With the world-class artistry on stage at the foundation, Chicago Shakespeare offers robust education programs that support personal development and career preparation for teachers, artists, arts managers, students and lifelong learners alike.
? A Global Theater – Here in Chicago, the World?s Stage Series showcases venerable international theaters and companies who break the boundaries of theatrical expression. And abroad, they tour CST?s signature productions to major international festivals and theaters across the globe.
? Partner in Innovation – CST is proud to serve as a leading partner in artistic and civic initiatives that are shaping the world?today and tomorrow. In active collaborations with their peers on local, national and international levels, they are engaged at the forefront of creative exchange, advancing thought and dialogue here and abroad.

They have evolved into a dynamic company, producing award-winning plays at their home on Navy Pier, throughout Chicago?s schools and neighborhoods, and on stages around the world. They serve as a partner in literacy to Chicago Public Schools, working alongside English teachers to help struggling readers connect with Shakespeare in the classroom, and bringing his text to life on stage for 40,000 students every year.

The Theater?s tradition of excellence and civic leadership has been honored with numerous national and international awards including the Regional Theater Tony Award, three Laurence Olivier Awards, and eighty total Joseph Jefferson Awards. CST participated in the Royal Shakespeare Company?s 2006 Complete Works Festival and was selected to represent North America at the Globe to Globe festival as part of London?s 2012 Cultural Olympiad.

StyleChicago.com - February 21, 2020
In this hand lettering class, learn how to use a brush pen to make beautiful curvy, bouncy letters. Use your new hand lettering skills... 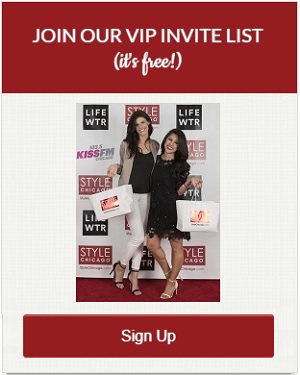 StyleChicago.com - March 8, 2020
Discover 100+ of the Midwest's finest artisans at the Chicago Artisan Market at Morgan MFG. This curated market celebrates the ingenuity of independently owned,...

StyleChicago.com’s Cruise in Style aboard the Odyssey (7th annual)