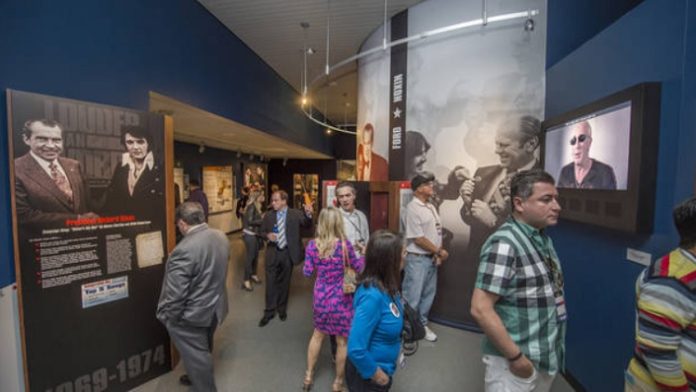 With amazing artifacts on loan from Cleveland?s Rock & Roll Hall of Fame, Louder Than Words: Rock, Power & Politics doesn?t just stick to the ?60s, it takes you right up to those Russian rebels Pussy Riot and beyond. The Epiphone that Lennon used on ?Revolution,? Dylan?s handwritten lyrics for ?The Times They Are a-Changin?? ? this exhibit doesn?t just teach you about rock?s link to activism and social change, it surrounds you with it.

Purchase discount tickets to this event.

Additional dates and times may be available. Times and prices vary by date. Please view ticketing page for details.

From the moment rock and roll hit the airwaves, it has played a crucial role in politics and social movements around the world. This one-of-a-kind exhibit at Chicago?s Museum of Broadcast Communications, Louder Than Words: Rock, Power & Politics, explores the power of rock to change attitudes about patriotism, peace, equality and freedom. Using video, multimedia, photographs, periodicals and artifacts, Louder Than Words will showcase the intersection between rock and politics. It will explore how artists exercise their First Amendment rights, challenge assumptions and beliefs, stimulate thought and effect change. Beyond music?s influence on the civil rights movement, the Vietnam War and gender equality, the exhibit will also feature other significant moments and figures, such as Bob Dylan, who rallied people against social inequality, the hip-hop music of the 80s that discussed police brutality in poverty stricken neighborhoods, and Pussy Riot, who utilized their music as an outlet for social activism in Russia.