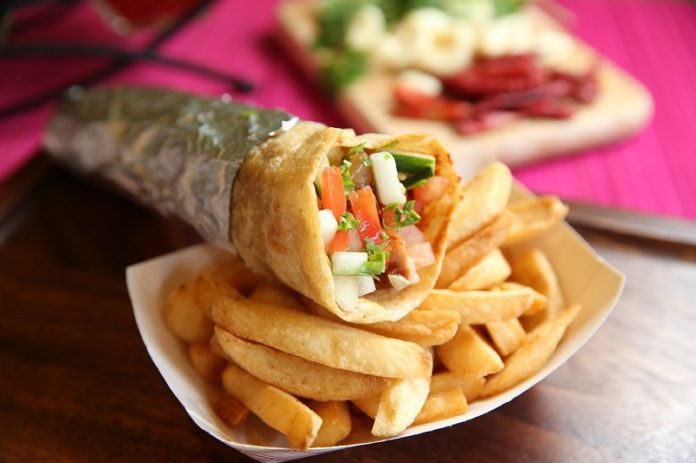 Hakka Bakka wants to introduce Chicago to India?s best kept secret – the most popular street food – the Kati Roll. Think beyond tandoori chicken and wrap your mind around Indian food that uses fresh ingredients and authentic recipes to showcase the myriad of flavors that truly represent the diverse cultural experience that is Indian cuisine.

Hakka Bakka’s menu provides a very simplistic approach with easy and customizable Kati rolls, rice bowls and salads. You choose from three proteins – lamb, chicken, and paneer (artisan cheese) – that are cooked in one of three styles which will satisfy everyone?s palate. Choose from tikka, a hot preparation of Indian spices, hariyali, a flavorful blend of cilantro and mint, and reshmi, a cream blended with poppy seeds and Indian aromatic spices.

What is a Kati Roll? 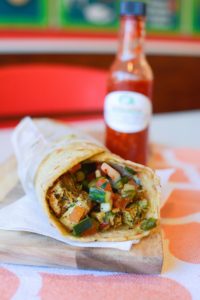 It is an Indian street food version of the burrito. Spice it up, spice it down, go vegetarian, go vegan, or choose from a choice of meat, you can dress your Kati Roll the way you like it. A Kati Roll offers the perfect medley of fresh, tangy, sweet and spicy chutneys prepared with love, every single day, as would be done in homes in India.

Kati in Bengali means “a stick.” In 1930, when the British were still contemplating if they should leave India, a popular eatery, Nizam?s Restaurant, skewered meat (kebab) on bamboo sticks and served them rolled on Parantha (flat Indian bread). Later, the Katis were replaced by iron, but the name remained. Today, Hakka Bakka makes vegetarian and
meat Kati Rolls, served piping hot and wrapped with the choicest dressings and chutneys.

What is Hakka Bakka?
The restaurant owners missed the charm and chutzpah of their ancestral city in India, but more importantly, they missed it for its Kati Rolls. The city was oceans apart from them, but the flavors lingered and their yearning translated to Hakka Bakka in Chicago. “Hakka Bakka” simply means being awestruck … they want you to be flavor-struck just like they are.-

Hakka Bakka Indian Kati Rolls goes to great lengths to source ingredients and cook a meal that is authentic Indian and devoid of any artificial flavoring or colors. They also serve rice, dal (lentil curry), and fries combos, which are a staple meal for billions across India.

About the founder:
Kaushik Guha started his culinary journey back in school days (in India) when he lived in Kolkata. Whenever he needed a quick snack to satiate himself he would turn to the ubiquitous Kati Roll. Years rolled by and Kaushik moved through various cities in India and the US and finally arrived in Chicago; gathering his gourmet food experiences across continents. Over the years he has been cooking fantastic meals for his family and friends while getting his MBA and earning his CPA.

On a trip back to the city of Kolkata, he reconnected with Swetha, his college sweetheart and now wife, and together they rediscovered their joy for the Kati rolls. After they put together a business plan, developed the recipes and raised capital, Hakka Bakka was established.

A Flavored Jamaican – the Cuisine of the Caribbean