Girl & the Goat opened in summer of 2010 with a goal of serving a family style menu of bold flavored foods in a fun and lively setting that would make guests feel at home from the moment they walk in the door.

To enhance the experience they offer a selection of wines from around the world with a focus on small producers, a rotating list of craft beers with a celebration of local Chicago breweries and a list of fun cocktails created by their bartenders. The menus offer a little something for everyone, and the staff is happy to help create the perfect dining experience for every guest that joins them.

They offer a variety of seating choices, including a comfortable lounge, bar seats, standard table seating, and four seats close enough to the kitchen line that you might be asked to help. Girl & the Goat accepts reservations but always welcomes walk-ins, nomads, adventurers, and those of you who don?t like to plan. 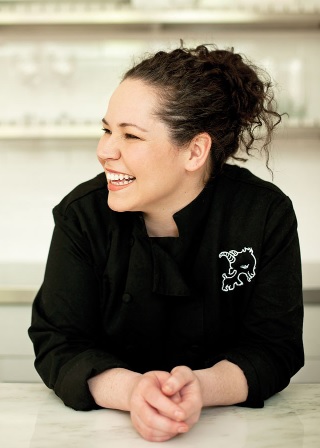 Stephanie Izard, Executive Chef: Stephanie Izard was born in Chicago, but grew up in Stamford, Connecticut. After finishing school at the Culinary Institute in Arizona, she returned to Chicago in 2000 to pursue her culinary career. A few years later she had the opportunity to compete on Bravo?s Top Chef, which she won along with being named fan favorite. The idea for Girl & the Goat began to take shape after Stephanie met her business partners Rob and Kevin of BOKA Restaurant Group.

Little Goat Diner (820 W. Randolph St.), Chef Stephanie Izard’s second venture with Boka Restaurant Group, opened across the street from Girl and the Goat in December 2012 and was named one of the ‘Best Diners in America’ by Food & Wine. The nearby Duck Duck Goat (857 W. Fulton Market), Izard’s 3rd restaurant in the BOKA portfolio, opened in March 2016. Earning 3 stars from the Chicago Tribune, Red Eye Chicago, and Chicago Magazine, Duck Duck Goat swiftly garnered a reputation as one of the hottest restaurant openings in 2016.

A Flavored Jamaican – the Cuisine of the Caribbean