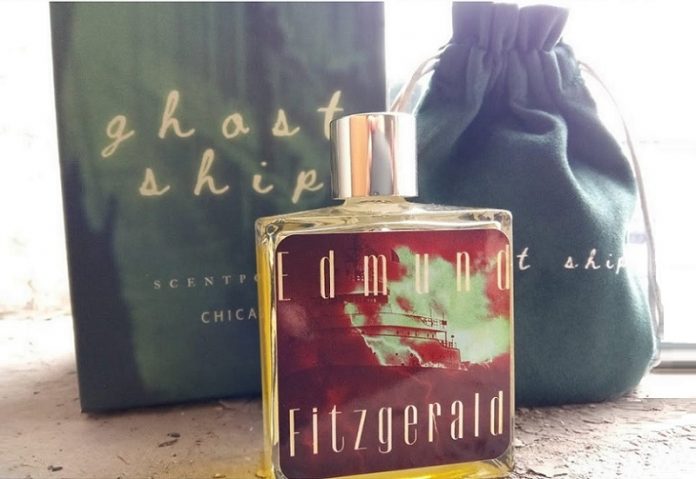 Ghost Ship Fragrance Co. is a Chicago-based handmade perfumery founded by author, historian and ghost hunter Ursula Bielski and her husband, journalist David Cowan. All of Ghost Ship’s unique unisex scents are inspired by legend, lore and literature, with Chicago-inspired scents as their specialty.

The perfumes are handmade using natural perfume oils representing Ursula’s olfactory excursion through Chicago legend and lore. Each of Ghost Ship Fragrance Co.’s handmade perfumes is inspired by Ursula’s thirty years of work as a paranormal researcher and author of 12 books on Chicago ghost lore.

Check out these best-sellers at the Chicago Artisan Market:
• Ravinia: An Enchanting Fragrance Inspired by Chicago’s Beloved Summer Music Festival Transport yourself to a heavenly evening under the stars when you don this enticing blend of notes of champagne, rose, freshly cut grass and the scent of spruce wafting from sweet violins. Sandalwood rises from the base to keep you in your reverie all evening long.
• Millennium Park: A Unisex Perfume Fragrance Inspired by Chicago’s Urban Playground The experience of the Windy City’s spectacular city park is all in this bottle of magic: a mix of notes of freshly cut grass, lake mist, lemonade, ginger, clove and vetiver.
• Garfield Park: A Chicago Fragrance for Men and Women Celebrating the Windy City’s Stunning Public Conservatory
If it’s flowers you like, then flowers you shall have with this magnificent marriage of lily of the valley, gardenia, potting soil and musk.
• 1929: A Unisex Fragrance inspired by Al Capone and Prohibition-Era Chicago
The scent of Gangland is a blood pact of holy basil, cigar, leather, rain and vetiver, transporting you to the coldest morning of that fabled year, Valentine’s Day.
• 1893: A Unisex Fragrance Inspired by the “Devil in the White City” and the Chicago World’s Fair
Return to this unforgettable moment in time when you wear this elegant blend of oriental garden, bamboo, bergamot, black tea and blue musk.
• Night at the Museum: A Fragrance Inspired by Chicago’s Haunting Field Museum of Natural History
A transporting blend of library, smoke, teakwood, ginger and Egyptian musk . . . fit for a departed king.

Ursula prides herself not only on the popular and unique scents but the carefully designed labeling and packaging of each scent.

About the Ghost Hunter:
Ursula’s interests in Chicago ghost hunting began at a young age. She grew up in a haunted house on Chicago’s north side and received an early education in Chicago history from her father, a Chicago police officer, who introduced Ursula to the ghosts at Graceland Cemetery, Montrose Point and the old lockup at the storied Maxwell Street Police Station.

An historian, author, and parapsychologist, Ursula has been writing and lecturing about Chicago’s supernatural folklore and the paranormal for three decades and is recognized as a leading authority on the Chicago region’s ghostlore and cemetery history. Aside from her writing, Ursula has been featured on numerous television documentaries, including productions by the A&E Network, The History Channel, The Learning Channel, SyFy, The Travel Channel, and PBS.

Ursula began making perfumes for herself and her family and friends after years of bringing home leaves, flowers and rocks from the many haunted places she visited around the world during her work as a paranormal researcher. Longing to capture and share the “haunting” experience of these unique sites, she began experimenting with the idea of recreating them in olfactory form. For 20 years she ran Chicago Hauntings Tours with her husband, but they had to shut down due to COVID. Ursula decided to make a new business selling the perfumes that previously, she had only made just for friends.

The Art of Banksy – Chicago Exhibit

The Art of Banksy is a globally acclaimed showcase features original and authenticated works associated with, arguably, the most intriguing and talked-about artist in...