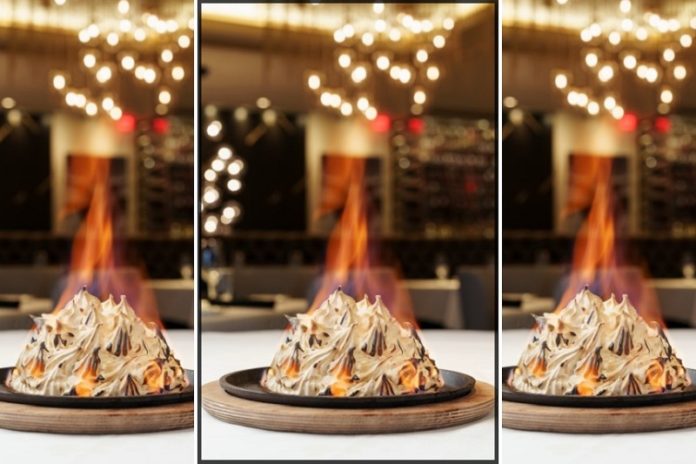 Dessert connoisseurs may recall the traditional Baked Alaska as an iconic retro dessert. Now, it is rarely seen in its original form. Baked and blazing, Perry’s Steakhouse & Grille introduces their newest signature dessert with their own twist, the Baked Alaska for Two.

Today, Perry’s Steakhouse & Grille is bringing it back with a modernized approach. Instead of a classic sponge cake, celebrity Chef Rick Moonen, Perry’s Master Development Chef, has introduced a citrus shortbread. The ice cream also has been replaced with a frozen lemon custard and covered with a vanilla bean cloud of meringue. Baked and then flamed tableside with Grand Marnier, it is time to experience this Rare and Well Done? Baked Alaska for Two. 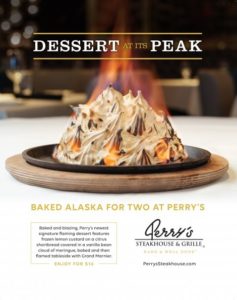 Background on Baked Alaska:
Charles Ranhofer, a French Chef who was working in New York City holds claim to the original Baked Alaska creation in 1867. The dessert was originally served to celebrate the United States? purchase of Alaska. Ranhofer’s version of the dessert included slices of sponge cake or pound cake topped with a ball-shaped build of ice cream or sherbet enclosed in meringue then flambéed or baked until browned.

Prior to the official creation, it is rumored that in the early 1800s, Thomas Jefferson requested ice cream to be served encased in a hot pastry at a White House state banquet. A couple years following, in 1804, an American physicist and inventor, Benjamin Thompson Rumford, became curious about beaten egg whites resistance to various levels of heat. Discovering a new dessert and naming it the omlette surprise, the popular dish and different creative versions took on many names from its makers in the years following, including ice cream bombes, Apples aux Pommes and Baked Alaska Apple Pie.