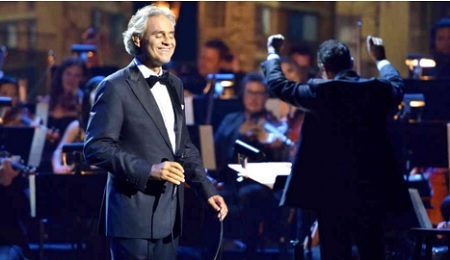 The best-selling classical crossover artist of all time, Italian tenor Andrea Bocelli, boasts one of the most beautiful and recognizable voices in all of music. Whether singing “The Lord’s Prayer” for the Pope, as he did in Philadelphia during His Holiness’ trip through the States, entertaining President Obama, appearing in one of his highly-rated PBS specials, or thrilling tens of thousands of fans with live performances around the globe, Bocelli and his smooth tenor voice are always impressive.

His latest tour, coming to Rosemont’s Allstate Arena, is set to spotlight his unmatched repertoire of beloved arias, crossover hits and music from his latest release, Cinema, which debuted in the Billboard Top 10, and includes songs from Evita, Dr. Zhivago, West Side Story and “The Music of the Night” from The Phantom of the Opera, among many more.

Purchase half-priced tickets to this event.